The Betalands: Sticking It Out In A Hard Survival Area

Minecraft has various settings and levels of difficulty, and PVC utilizes these very effectively in order to enhance the game experience and provide a challenge to players, no matter their skill level. This page is intended to provide insight and be a guide to anyone who wanders into PVC's largest hard survival area- The Betalands. For a more in-depth and official look at the difficulty levels in the game as a whole, take a look at the Minecraft Wiki's Difficulties Page.

The Betalands are a region of the world in PVC that lies outside the Farlands. They contain very diverse biomes with one exception- there is no ocean.

This is not to say there is no water- far from it, as the betalands features a network of lakes and rivers that permeate its terrain, along with waterfalls springing from the shattered surface of the farlands.

For more info on who lives here and what interesting places have thus far been built, check out the maps page!

A player can’t mistake the moment they’ve entered the betalands- a message will pop up across the middle of the screen, warning that they’ve entered a hard survival area. But what does this mean? In short, it’s telling you that in this region various custom features and rules built to make the game more difficult will be applied. The world of PVC has a few special challenges in store for anyone seeking to venture beyond civilization to find their fortune. These changes to how the game works really do present a conundrum for any player unfamiliar with survival mode and how best to keep their head! Diamond armor, netherite armor, and elytra have even been known to unequip without warning upon entry to the betalands. Other include, but are not limited to:

The biggest obstacle any betalands wanderer will face is the darkness- natural light sources such as lava and sea pickles are your only options, as artificial sources were restricted shortly after it's release. Nearly all player-crafted light sources were converted to other blocks; there used to be a sign made of shroomlight that read "TCC Business", but it was turned into nether blocks after the restrictions were put in place. One known case exists of an artificial light source being permanent; a redstone lamp, placed by player Nick_Named, seems to have been grandfathered in and remains in place to this day. Light levels all around the Betalands region are automatically adjusted to be lower than what they should be. This increases difficulty for the player, since it's hard to see in pitch dark.

Lava in particular is a dangerous choice, but is by far the most readily available way to light any area players wish to keep safe from mob spawning. There are many, many ways to use lava- some are pretty, others not; it all depends on available resources and personal preference. Some of the lighting setups used by the player Scaliedog are detailed below with images from her base. These configurations are made in bedrock edition. She began the majority of these builds with no prior knowledge of how lava works, but other intrepid explorers need not make it difficult on themselves. Visit the Minecraft Wiki’s page for flow maps and other mechanics of using lava!

Take note that use of lava for lavacasting is banned in PVC, so be sure nothing you're doing to light your base can accidentally make that happen! Another thing to remember is that lava is automatically set to not flow on claimed blocks. If you set it on the ground or another block of a claim, it will not spread unless you enable it with a command in the chat: '/ps flag lava-flow allow'. This must be done separately for each claim you wish lava to flow on. Another option is to build your lighting flows before you place a claim block.

A single lava bucket dumped atop a piece of dirt and closed in with cobblestone. 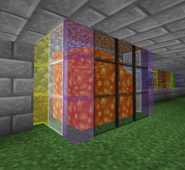 The same lamp, updated with glass panes when the area was renovated.

The simplest way to use lava, and recommended for beginners. Dig two blocks down, dump lava in the bottom, and place glass or a slab on top.

Scaliedog's base Skelequestria at night, demonstrating hidden lava beneath the cobblestone slabs of her pathways.

A large-scale system that uses lava flow mechanics to cover a large area. Each of these lamps uses only one Lava bucket. Good for when lava is scarce. Any block can be used to contain the lava as long as it is exposed on top.

An absurdly tall lava tower lighthouse that extends underground to light up a passageway. This uses one lava bucket.

The lava tower used by Scaliedog for her home. This configuration lights both the interior and exterior of the building. One lava bucket is needed per tower.

Scaliedog's house, lit by the corner lava towers at night. This shot also features the pyramid of glass which contains six lava buckets.

If lava and its pitfalls are too risky for you, then go with sea pickles instead. Many of the same strategies are employed (encase an area in glass, place 4 pickles, empty a water bucket into the block with sea pickles) but the risks from fire damage or lava casts are eliminated.

Sea pickles are a viable light source, but cannot be used to cover as much area as a lava flow. They of course require a water bucket or a waterway to function, but can be made to blend into the landscape in several ways. They are a bit harder to get, but if you go looking for a coral reef, you might just find some! For more info on how to work with them, check out the official Minecraft Wiki.

An example of a sea pickle lamp.

Seapickles used as a ceiling light. 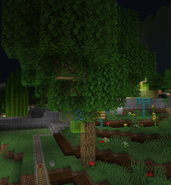 Seapickles integrated into a tree.

A shot of a couple in-ground sea pickle lamps.

A shot of Skelequestria at night, showcasing the amount of light possible using seapickles and lava together.

The new and improved way to light up your base while scaring off things that want you to die- candles! Candles are almost as versatile as torches and thus far have been proven to stay in the betalands and function perfectly as a light source. Just remember that they work just like Sea Pickles in that you need four of them to equal a torch- but you may only need one or two for very small areas, as mobs now only spawn in light level 0.

Candles are a viable light source as of the 1.18 update that added the Outer Rim to PVC. One only needs honeycomb and string to make these, and they can be dyed many colors to fit almost any decor! To learn about how to make and use them, have a look at the official Minecraft Wiki.

Candles keeping a spawner at bay in the betalands.

Not quite the first, but the second round of candles put down by *Scaliedog to test viability for the betalands on the day of the 1.18 update.

There are a few entrancing benefits to braving the betalands, but riches are often the first reason players visit this area. Ores and minerals of all kinds spawn more frequently and often in larger veins than in other regions of the world. Anyone willing to traverse the farlands and sink their tools into the stone will find valuable resources in no time.

Not only are there riches for the taking, but there are seriously enormous tracts of land available, too. There are very few players who are willing to brave the conditions of the betalands, and it shows- on the map, the orange areas are places players have claimed. It is obvious that the Inlands are well-populated, even out to the edge. Beyond the farlands, however, the betalands are all but empty and ripe for development. This makes it a great place for anyone who likes to live far from neighbors with noisy ranch animals and redstone contraptions. If you wish to make a visit to this wild place, you are bound to find interesting places untouched by other players, with beautiful views and lots of resources!

Along with open space comes free-range travel. There are a few well-maintained bases and villages wishing to become towns, such as Skelequestria, to be found in the betalands. They serve their purpose as a safe place for players to rest while they plan their next round of exploits. The betalands provide a chance to attempt to sate the wanderlust of inhabitants and visitors alike. Notable places are described below, along with how to get there and who to talk to about making yourself at home.