As players are active on the Peaceful Vanilla Club server, they will earn Server Ranks based upon their amount of active playtime. Some ranks are also achieved from winning an event or donating to the server. Server Ranks determine a number of permissions levels for users, as outlined below.

These ranks are gained simply by playing on PVC. To check your playtime, use the /playtime command. Playtime does not include AFK time as PVC uses an advanced anti-AFK detection system to prevent the use of AFK machines, etc.

When a player reaches the Joined rank, they are given a coal claim block and gain access to the /msg and /r commands.

There are some ranks that can't be gained by playtime, and instead have other requirements.

As a player's rank increases, so does the amount of claim blocks they can use, and the number of non-adjacent claims they can have.

Players can set up their own shops using shopkeepers. The maximum number of shopkeepers a player can have is limited by their rank. 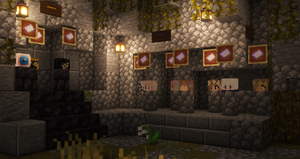 These ranks are held by staff members. Staff are chosen by Marshall_cpp, KingNeme and zDavidMeson. Asking to become a member of staff is against the rules.

Some players will have a tag before their name. These tags are given manually by admins and have several different meanings and ways to earn them.

Community tags indicate that a user holds a special status within the PVC Community.

Union tags indicate that a user is a member of the tag's Union.

Sometimes players will get a temporary tag for events or locations.

Players who are not using Java Edition will have a small tag indicating which platform they are playing PVC from.