There are several different commands that allow you to customise the function of your claim. This page details what those commands are and what they do. Using /ps help will provide you with a list of available commands.

For a more general, less in-depth guide of the claiming system, read the Claiming guide.

/ps info lists information about your claim. Here are the things it tells you:

/ps add/remove allows you to add or remove a member. When you add a member to your claim, they can do everything you can do in the claim*, although they can’t alter the claim or claim block in any way.

*This can be changed if you edit the claim flags – see below.

/ps addowner/removeowner allows you to add or remove a claim owner. You are a claim owner, so when you add someone else as a claim owner they have just as much power over the claim as you do, including being able to add claim members/owners, edit claim flags, or even remove you from claim ownership.

/ps list lists the locations of all the claims that you own and are a member of. 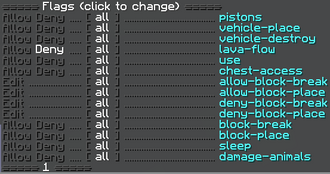 /ps flag /ps flag brings up a list of ‘flags’ that you can change. These flags allow you to customise the function of your claim.

Each flag does something different:

To edit the flags that have ‘Allow Deny’ next to them, you simply click on allow or deny. Then, if you want to specify who is affected, you click ‘[ all ]’ next to it. You can cycle through several options: members, owners, non-members and non-owners.

For the flags that have ‘Edit’ next to them, you must put in a value of which block you want to be affected before you can change who it affects. For example, say you want to allow non-members to break dirt blocks. You click on ‘Edit’, which automatically inputs /ps flag allow-block-break into your text box. Because you want dirt blocks to be broken you would say /ps flag allow-block-break dirt. Then you say /ps flag to bring up the options again, and you click on ‘[ all ]’ until you reach non-members.

It’s possible to input more than one block in the value. When doing this, you simply list the blocks next to each other separated by a comma but no space. So if you’d wanted players to be able to break dirt and oak planks you’d say /ps flag allow-block-break dirt,oak_planks. However, if you want to change the players affected to anyone other than '[ all ]', you have to do this with only one block value before then adding the additional blocks.

The ‘Edit’ flags can be combined with block-break and block-place. If you wanted everyone to be able to break all blocks except for cobblestone, you’d click on ‘Allow’ next to block-break. Then you’d say /ps flag deny-block-break cobblestone.

It is not possible for some Bedrock Edition players to click on these in-chat options. If this is the case for you, you will have to type the commands out manually.

If you wish to change an 'Allow Deny' flag, you can simply type out /ps flag [flag name] [allow/deny/null]. So, to change the 'pistons' flag to 'Allow', the command is /ps flag pistons allow.

If you wish to change the group that a flag applies to, you must add -g [group] immediately after /ps flag. So, to allow only owners to activate pistons in a claim, the command would be /ps flag -g owners pistons allow. This is true for both 'Allow Deny' and 'Edit' flags.

/ps rent brings up the list of rent commands.

Use /ps buy to buy the claim that you are standing in, if it's for sale.

With /ps sell [price] you can set the number of emeralds that your claim will be sold for. /ps sell stop stops the claim from being available to buy.

If you are ever unable to find your claim stone, but it is still protecting an area, it may be hidden. Use /ps unhide to reveal it.

/ps view uses particles to show you the border of your claim.

/ps unclaim returns the claim block to your inventory, unclaiming the area.

The claims’ owner comes along and changes the coal’s priority to 5. Now, because the coal claim’s priority is higher than the redstone claim’s, the coal claim takes precedence. This time Steve can break blocks in the overlapping area and Alex can open the chest.

How to Turn Your Claim Into…

There are several common uses for claims, other than just protecting your stuff. Here’s how to do some of them.

When making a hotel, you probably want non-members of your claim to be able to open doors, use pressure plates, and possibly even open chests.

To allow them to open doors, choose ‘Allow’ for the flag ‘use’.

To allow them to access chests, choose ‘Allow’ for the flag ‘chest-access’.

And that’s it! Making a hotel is that easy. Make sure to leave the settings for who the flag affects on ‘[ all ]’, otherwise you’ll have to add players to the claim for them to be able to do anything.

Making a shulker area is a lot more complicated than making a hotel. There are two ways to do it – the first is more secure but requires two claims and limits which colour shulkers can be placed where, and the second doesn’t have this problem but means that players can place nearly any block in that area.

When making a shulker area, you want players to be able to place and break shulkers without breaking any other blocks. The ideal way to do that would be to do /ps flag allow-block-place shulker_box and /ps flag allow-block-break shulker_box. Unfortunately, each colour shulker box has its own ID so they all have to be typed out, and when they’re all in one string it’s too long for the chat text box. This means that you can’t allow all the shulker boxes to be placed/broken in one claim and must use two instead.

Here’s how to do it:

(These strings are quite long, so feel free to copy and paste them from here into your game.)

This second claim will now allow blue, purple, magenta, pink, white, light grey, grey, black, and undyed shulker boxes to be placed and broken in it.

Next, so that players can open their shulkers, choose ‘Allow’ for the flag ‘chest-access’ in both claims.

That’s it. Now players can break and place shulker boxes in these two claims. If these claims are inside a larger claim, make sure that they have a higher priority than it.

For this method, players are prevented from breaking or placing any of the blocks that make up the shulker area, but they can break or place any other blocks. It is for this reason that this method is less secure. If you use this method to create a shulker area and someone abuses it, don’t hesitate to report it to a member of staff.

Here is an example shulker area:

The blocks that were used to build this area are iron blocks, packed ice, smooth quartz stairs, quartz blocks, quartz pillars, an end rod, and a birch sign.

To prevent players from breaking the blocks that make up the shulker area, the command /ps deny_block_break must be used. For the example shulker area, the full command used would be /ps flag deny-block-break iron_block,packed_ice,smooth_quartz_stairs,quartz_block,quartz_pillar,end_rod,birch_sign. For your shulker area, replace the blocks listed here with the blocks that you used; the fewer blocks used to build the area, the easier it will be. If you use too many blocks, the string will become too long and this method won’t work correctly.

Next, click on ‘[ all ]’ next to ‘deny_block_break’ and ‘deny_block_place’ until you reach non-owners. This means that you won’t be affected by these flags, although members of your claim will be.