This page is the official hub for the core team of directors to display information, plans, progress, and other details regarding the execution of the Betaways Project. We are updating this wiki page as we collect new information, make decisions, and seek players for teams. It is intended to give the playerbase of PVC a cohesive, easily-understood guide to the project; we hope to provide transparency and promote involvement with the community that this project is ultimately intended to benefit.

The Betaways are an infrastructure project that will span the distance of the Betalands and give safe, reliable egress all the way from the Hyperloop out to the newest area of the map which will, along with a second ring of farlands, be generated 1.18-style. It was proposed by Neme on Feb 4, 2022 as a way of bringing the community together and ensuring access to the newest lands the server has to offer.

The PVC world is about to update to Minecraft version 1.18, adding a new area around the edges of the current map. That obviously means new features, new blocks, new items- and new land generation. Undoubtedly, it’s an exciting prospect, and we all want to explore it as soon as possible. But this is PVC, where we don’t teleport unless we’re performing modmin duties, so the question is… how do we get out there?

It has been confirmed that no further admin-made transportation infrastructure will be developed in the newer parts of the map. They will keep expanding the existing infrastructure of the original map; the Hyperloop and all three railway rings will be improved upon as needed. New connections may be added as well, but nothing outside the first farlands ring will feel the touch of an admin’s tools. This decision was made in the spirit of promoting player-made projects and community collaborations, leaving it up to the players who call PVC home to come up with solutions.

The Betalands are especially dangerous for new, unwary, or unskilled players; to preserve that thrilling experience for those who like a challenge, all the current hard survival mode rules will remain in place there after the map expansion. Among other things: elytra will still be useless, sprinting impossible, unnatural light sources untenable… to top it all off, the mobs in this area are more numerous, often stat-buffed, and capable of grievous injury to the unprepared. Thus, a plan was born to build and maintain the Betaways to ensure that anyone can enjoy the newly generated lands on the outer edges of the world- regardless of equipment and skill level!

The update and expansion has happened! We got the functional iceroad portion of the Betaways done, but it's imperative that this project stays on course and we finish as soon as possible! If you are interested in helping with a particular task, ask the direction team member in charge of that division about joining their team.

The project is well underway and all of the main ice has been placed as of Feb 15, 2022, along with the glass panes for rails. Discussion has concluded about the design of the basic functional portion of the roads, and the basic structural design has been finalized. The next task is to officially kick off the building phase, which happened in the first weekend of April 2022.

The plan is to build four iceways from the first farlands ring out through the second. There will be one in each cardinal direction of the map, centered on the axis lines. They connect to the Outer Ice Loop at or as close to the axis as possible.

There is a core team of eight individual players who have come together to spearhead this project; their usernames are marked with a blue star tag both in-game and on the PVC Discord server. They have each taken a leading role in making the Betaways a reality, and their duties are detailed below. An * denotes a player who uses the Bedrock version of Minecraft.

Several players on the direction team will be building a team to help with their department’s tasks. It expected that everyone will have a hand in laying the blocks for the Betaways, but the work done by the Directors will be much more than that. Not everyone who wants to help will need to make a major commitment to the project, as all players have lives outside of PVC, and we are a widespread bunch.

Carefully, and with great enthusiasm :)

There are a few guidelines that must be followed in order to ensure that the Betaways can be used safely and easily by any player who wishes to travel them. When designing the basic form of the roads, the following elements have been considered imperative:

A tutorial on how to build the basic structure has been made by *Teleportxcraft! Please review it before you start helping to build so that everyone is on the same page. Any Small changes made to this design will be noted before the actual build starts and added to the description of the video, as well as listed here. 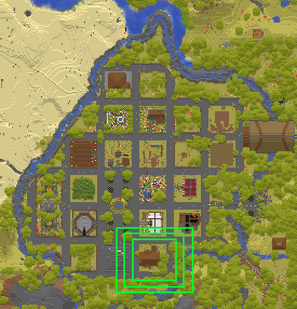 Central storage for this project is at Cobbletown!

Officially, construction is going well on this project. There is an established storage area at -119, -113. For information on what we're gathering to store there, have a look at the material lists below. If you have items to donate or need to request access, contact *Teleportxcraft or *Scaliedog. Each team has a headquarters building near the inlands beginning of each Betaway, with storage specifically for that road's needs. The location of each is noted in the team roster table above.

The direction team intends to equip most or all of its team members and their divisions with all or most of the items each player will need to successfully help with construction on the roads. These items may include:

The ice farm at Project Celdenge is now available for public use!

On The Construction Plans

On The Relationship With Existing Infrastructure

On Ways To Help

On the future of the Betaways